ES6: var vs let vs const

TL;DR: don’t use var anymore when You declare variables. 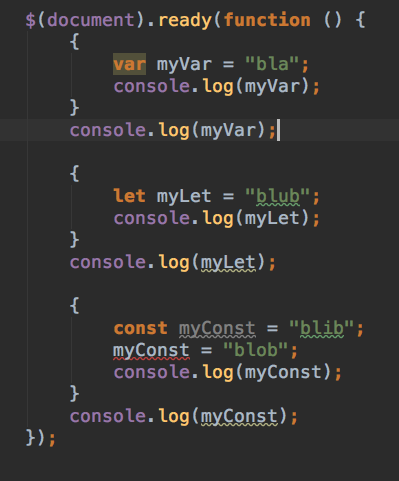 As You can see a variable declared with the var keyword is visible outside its enclosing scope. Most of the time it’s not what You want.

When You enable ES6 support in PyCharm it already warns You if You use var:

To declared a variable which is on visible in its scope You can either use let or const.

Let lets your variable be mutable so you can use it in a loop as counter. If You want to guarantee even more that one variable is used for one concept only You can use const which makes the variable immutable.

How to use Greasemonkey to make your life easier
February 17, 2022
JavaScript modules
May 12, 2020
Calculator for Resistor Values
September 13, 2019